Von Grey is an American indie rock band of four sisters, who have been playing music nearly their entire lives. Formed in Atlanta, Georgia, United States in 2011. The sisters have received a classical training in music, and performed on more than 200 shows in the U.S. The group has currently three of the sisters active: Annika, Fiona, and Kathryn von Grey. The youngest of the sisters, Petra, stepped away from the band in October 2016 to focus on her schooling. 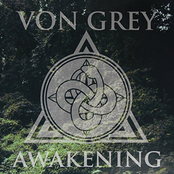