Tess Parks was born and raised in Toronto but moved to London at seventeen to pursue music and to study photography. She has played solo for the past four years. Having moved back to Toronto in 2012, she put together her amazing psychedelic backing band of "sexy and talented musicians”, The Good People. Early in 2013, she self-released a very popular EP ‘Work All Day/Up All Night’ Tess describes her songs as "lo-fi alternative drones with a hypnotic vibe”. 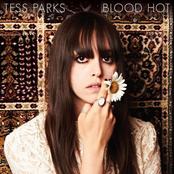