Merrilee Rush (born on 26 January 1944), is an American singer, best known for her recording of the song "Angel of the Morning", a Top 10 song which earned her a Grammy nomination for Female Vocalist Of The Year in 1968. She grew up in the north end of Seattle, Washington, USA. As a child, she studied classical piano for 10 years. In 1960, she auditioned for a band (directed by her first husband) that played sock hops. Next, she was part of Merrilee and Her Men, doing covers of male pop hits. 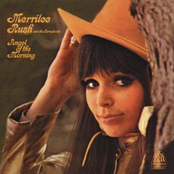 Angel Of The Morning