There are multiple artists with this name: 1) A Japanese artist. 2) Lumiere is an Irish group consisting of two fine female voices, Éilís Kennedy and Pauline Scanlon. Both of them come from the small Kerry town of Dingle. Their sound recalls very early Joan Baez - just perfectly tuned voice with acoustic instruments. On their 2010 album, Lumiere, they sing seven songs in English - all in the Irish tradition - and four in Irish Gaelic. 3) Lumiere is a Mexican band playing Space Rock. 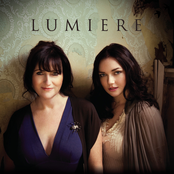