Linda, Lady McCartney (1941-09-24 – 1998-04-17), born Linda Eastman in Scarsdale, New York, to a Jewish family, was an American photographer, best known for her marriage to musician and Beatle Sir Paul McCartney. Linda made an uncredited vocal contribution to the Beatles song Let It Be during the band's recording of the album of the same name in early 1969. After the breakup of the Beatles in 1970, Paul began teaching Linda to play keyboards, and included her in the lineup for his new band, Wings. 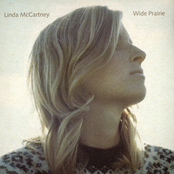