Kitty Kallen (born Katherine Kalinsky; May 25, 1921 – January 7, 2016) was an American popular singer whose career spanned from the 1930s to the 1960s—to include the Swing era of the Big Band years, the post-WWII pop scene and the early years of rock 'n roll. She is best known for her 1954 solo recording '"Little Things Mean a Lot" — a song that stayed at the U.S. number one spot for nine consecutive weeks, charted in the U.S. for almost seven months, hit #1 on the UK singles chart, and sold more than two million copies. 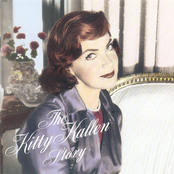 If I Give My Heart to You / Honky Tonk Angel