Kenotia was a rock band formed in Marietta, Georgia, in December 2005. They have been featured in the UK magazine Big Cheese. Also, they were featured on MtvU as best music on campus. They toured on the Vans Warped Tour and played Sunday at Bamboozle 2007. In the August of 2007, it was revealed that bassist Tim Leopard left the band for undisclosed reasons. Also, in the November of 2007, it was also revealed that drummer Andy Appling parted ways with the band. 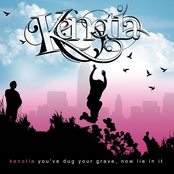 You've Dug Your Grave, Now Lie In It