Singer/songwriter/guitarist Kathy McCarty helped make her former band Glass Eye one of the most interesting (if not commercially successful bands) to come out of the Austin, Texas music scene in the 1980's. When they disbanded in 1993, McCarty decided to record an entire album dedicated to the songs of another local favorite, Daniel Johnston. Johnston's songs possess the honesty and pain of the blues and the charm of the best pop music. Most of his recordings 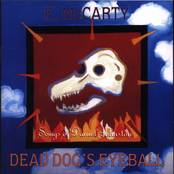