Karen Anne Carpenter was a highly successful American pop singer and drummer. She and her brother, Richard, formed the popular 1970s duo Carpenters. This page deals with her solo career which consisted on a single eponymous album which was finally released in 1996. All of the songs were from the New York solo sessions with producer Phil Ramone in 1979 and 1980. Carpenter suffered from anorexia nervosa, a little known disease at the time, and eventually died from complications related to the illness at the age of 32, in 1983. 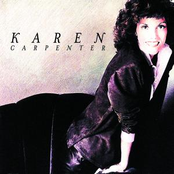