Julie Peel is an American singer-songwriter based in Los Angeles, CA. Peel unleashed her debut full-length album on American Laundromat Records (ALR) in September 2009 and has been enjoying rave reviews and charting at college & specialty radio. Previously featured on ALR compilations including Just Like Heaven (a tribute to the Cure), Gigantic (a tribute to Kim Deal), Dig for Fire (a tribute to the Pixies), and Cinnamon Girl (a tribute to Neil Young), this is Julie’s first solo full-length release. 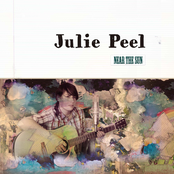