Geike is the solo project of former Belgium based Hooverphonic singer Geike Arnaert (born in Poperinge, 13 September 1979) She left the band in 2008, after eleven years and many Belgian awards for her vocal performances, and finally released her début solo single Rope Dancer in 2011. In October 2011 she released her début album as a solo artist For The Beauty Of Confusion. Between 2008 and 2011 her distinctive vocals could be heard in a variety of projects. 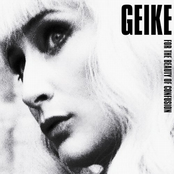 For The Beauty Of Confusion