Emily Haines (born January 1974 in New Delhi, India) is a Canadian singer-songwriter and keyboardist of the indie rock band Metric and a part-time member of the group Broken Social Scene. She also released a solo album as Emily Haines, plus an album and an EP as Emily Haines & The Soft Skeleton. Emily is the daughter of Canadian poet Paul Haines and sister of Canadian television journalist Avery Haines. She was born in New Delhi, India, and raised in Canada. 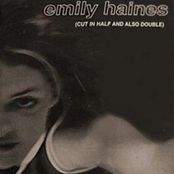 Cut In Half and Also Double