Casey Dienel (born March 10, 1985) is an American singer-songwriter and pianist. She released her debut album, Wind-Up Canary, in 2006 on Hush Records. Dienel presently performs and records as White Hinterland, whose first album, titled Phylactery Factory, was released on March 4, 2008, by the independent record label Dead Oceans. On January 4, 2008, after a few months hinting at "change," Dienel announced in her blog that "for the present and foreseeable future, there won’t be any more Casey Dienel. 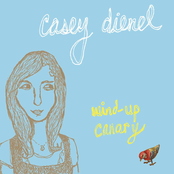 Thao with The Get Down Stay Down