April Stevens (born Carol LoTempio on April 29, 1936 in Niagara Falls, New York) is an American singer. Though she has been recording since she was 16, and had a few chart successes with Henri Rene's orchestra in the early 1950s, she is perhaps best known for her 1963 duet "Deep Purple" with her brother Antonino LoTempio (singing under the stage name Nino Tempo) that went to No.1 on the Billboard charts. The song won the 1964 Grammy Award for Best Rock and Roll Recording. 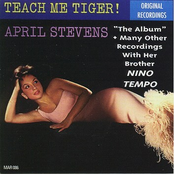