Daughter of producer Lenny Waronker, Anna appeared on the scene as the singer for that dog. The band met with limited success: its final album Retreat from the Sun was initially intended to be Waronker's solo debut. The band broke up in 1997, and she subsequently worked on music for films and television. Anna contributed tracks to the teen flick Josie and the Pussycats (2001) and arranged the theme for UPN's 1996-1999 sitcom Clueless, and along with husband Steve McDonald (Redd Kross), produced Imperial Teen's third album, On. 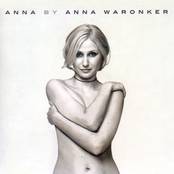